Posted at 10:10h in Demographics, Marketing by Sibet B Freides 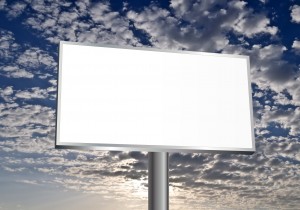 Outdoor advertising may still be around… but it has a lot of catching up to do.

When billboards first appeared they were made of poster paper and hung where passersby couldn’t help but notice them—and today, that’s largely unchanged. The messages may have evolved but advertisers are still just hanging posters outside—static message and all—hoping their ads will resonate.

In today’s ADHD society where every idle minute we have (like waiting in line at the bank or the grocery store) is spent updating our Twitter status or playing games on our smart phone, no one is paying attention to large broadcast signs above our heads telling us what to do.

Like Social Media shifted the paradigm from call to action to joining the conversation, outdoor advertising must encourage and facilitate consumer participation.

How can you expect people to interact through a largely impersonal medium, the outdoor ad?

In 2008, the San Francisco Zoo nailed it. The organization was suffering extremely low attendance at the time and launched an outdoor campaign called “Critter Quest.” The ads, posted on bus shelters across the city, displayed posters of oversized butterfly wings, moose ears, and peacock feathers, and when someone took a picture in front of the ad, they’d end up looking like that animal.

The ad asked people to post their pictures at OurSFZoo.com, and the most creative photos would be chosen for the zoo’s next round of print advertisements.

The campaign was a wild success (pun intended), helping the zoo exceed its attendance goals by about 25 percent.

Creating interaction with the brand gets people excited.

Previously, the only option for an outdoor ad was to direct consumers to a phone number or web address and hope they remembered it when they got home. New technology, like text codes and bar codes, is making it easier to offer immediate rewards for interacting on the spot.

For example, New Yorkers who walked past a billboard for the Broadway musical “In the Heights” could text the word “heights” to a five-digit number and receive a video message from the musical’s main star. The campaign, which ran last year, achieved a 24-to-1 return on investment, according to Targeted Marketing magazine.

Some brands are starting to integrate outdoor campaigns with social media, the ultimate place for consumer interaction.

Surprisingly, digital billboards are still being neglected in the outdoor world. Right now, only 0.4 percent of the nation’s 450,000 billboards are digital, which allows a message to change every four to 10 seconds.

They’re not bringing the results clients want because many advertisers use the same copy and visuals from their static ads. Instead, they should be taking advantage of their ability to change this message on the fly.

Outdoor advertising is still behind the times but not dead. The technology to interact is there, let Idea Associates help you use it to grow your business effectively.

Have you seen any interactive outdoor advertising? What really stood out to you and created a memorable experience? Share your comments below, we’d love to hear!