23 Feb Water Efficiency – Should It Be on the Standard Features List?

Posted at 09:15h in Green by Sibet B Freides 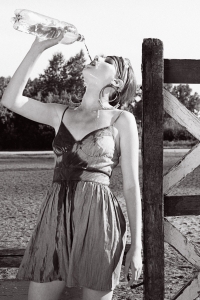 Many stars are publicly supporting the water crisis, which has reached dire proportions in Africa. But few Americans realize that there is a water crisis here in the United States.

According to the EPA, 36 states will experience water shortages by 2013, even under non-drought conditions. No state will be completely unaffected.

Part of the reason we are running out of water is due to the country’s growth—our population doubled between 1950 and 2000. Our demand for water has also more than tripled, though!

How much does the average American family use? 400 gallons. In fact, by the time we leave the house in the morning for work we’ve each already used more than 30 gallons by showering, brushing our teeth, making coffee, etc.

How does it affect homebuilders?

They’re in a position to do much more than conserve a little water. Already having made tremendous strides in homes’ energy efficiency, it stands to reason that water efficiency is the next step.

Smart use and conservation of graywater includes shorter plumbing that runs from water heaters to points of use, hands-free fixtures that keep water from continuing to run when it’s not needed, and sprinkler controllers and rain sensors that will keep overwatering to a minimum.

If anything was learned during the move to energy-efficient homes, it’s the fact that change was easier to accomplish if new products offer something better than the minimum requirement. New Watersense labeling requires that products must offer equal or superior performance while using 20 percent less water.

Where do you think water efficiency stands in consumers’ reasons to buy a green home?