28 Feb Has Print Media Fallen Behind for Good?

Posted at 11:28h in Marketing, Real Estate Trends by Sibet B Freides 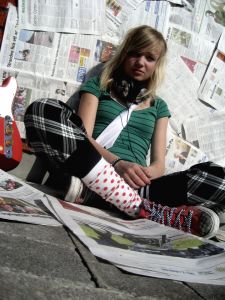 Though the death of print media was declared in late 2006 it actually made a bit of a comeback in 2010. Next it became well known that the Internet is the place that consumers increasingly spend their media time. Today we know that people are actually spending more time on their mobile phones than they are spending interacting with print media.

According to eMarketer, time spent on mobile devices is now an average of 65 minutes a day, compared to 44 minutes a day for magazines and newspapers.  Although both were tied last year, mobile actually grew by 30%.

Are media dollars spent online surpassing those spent on print?

Mashable.com recently proclaimed they would for the first time in 2012. What does this mean for REALTORS®?

The return-on-investment of real estate ads in newspapers and other print media have been second-guessed for quite some time, as multiple studies have shown that the majority of homeowners begin their search online. You can see this trend illustrated in eMarketer’s chart below: 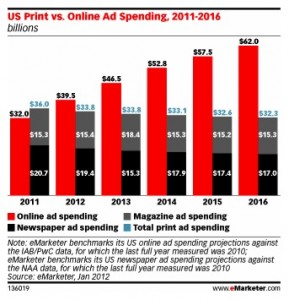 Why exactly does online surpass print media?  Today’s consumer is accustomed to the instant gratification of the Internet – information is free and mobile. Now, even those who enjoy newspapers and periodicals can read them on their tablets. But what about real estate? Consumers still seem to be attached to local newspapers.

Of course, knowing your local market is very important, but keeping up with national trends is as well. Agents should take a good look at the tools and new strategies available to them and reevaluate. The same old formula no longer works in this market.

That being said, we believe some print media remains very effective in real estate. The most successful advertising programs we have found offer a customized solution including print, online, and eFlyers in a competitively priced package.